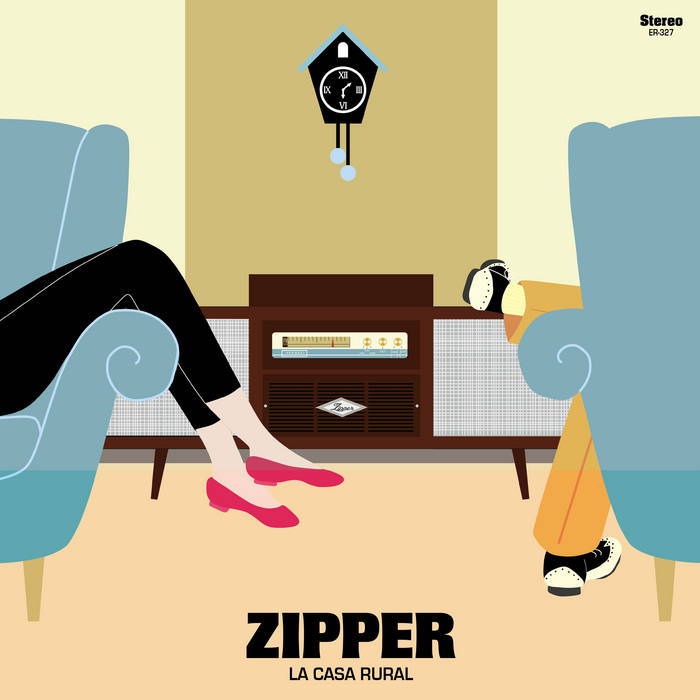 Ever since we released ZIPPER’s last single, which is now out of print, the trio consisting of Mª del Mar, David and Óscar has experienced a meteoric rise. In this brief period of time, ZIPPER has released several singles and songs on different indie labels all over the world; they have performed at the Indietracks festival in England and at Madrid PopFest; they’ve crossed the Atlantic to play in the latest edition of New York PopFest… the immediacy of their songs has crossed borders and has captured the most hardcore fans of the most iconoclastic, carefree punk-pop that doesn’t leave out the huge pop melodies, along the lines of key groups like SHOP ASSISTANTS and TALULAH GOSH.

Their new single, an orange 7” limited to 333 copies, gives proof of all these strengths, pumping up their melodic qualities even more, if that’s even possible. And as proof we have that opening track in Phil Spector-style that is “La Casa Rural”. The song ultimately turns into the perfect soundtrack for a Jess Franco movie, telling the story of the hardships of a trip to the mountains with irony and audacity, set to a devilish rhythm. “No Esperes Un Programa Detallado” unleashes their more Ramones-like side, reminding us of JUNIPER MOON on this song that is hymn and a declaration of intentions all in one: “Todo lo que hago es improvisar” (All I do is improvise), sings Mª del Mar between hyper-energetic choruses. In a blink of an eye we get to “Un Poco De Pasión, Por Favor”, punk-pop with riot grrrl spirit along the lines of VACACIONES at their most rabid. Bands like LOS FRESONES REBELDES and HELEN LOVE themselves would just love this song.

Immediacy, speed, distortion, and so much energy. With so much to say, with that incredibly fun, rebellious, fiery (yet fire proof), non-conformist spirit, it’s no surprise that ZIPPER’s songs are still winning over fans all over the world. And here we all are to keep on enjoying it.

Bandcamp Daily  your guide to the world of Bandcamp